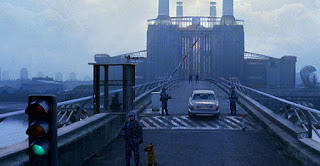 Watching part of Aeon Flux on Frode's big screen this weekend reminded me of how important it is that our dystopic nightmares remain rooted in and relevant to our own contemporary world and its present problems. Aeon Flux struck me as almost totally irrelevant, stylistically a kind of Logan's Run meets Buck Rogers in the 25th Century.

There's something rather 70s about Children of Men's version of incipient apocalypse too. In particular I was reminded me of the final Quatermass series which starred Sir John Mills. Social and political order are degrading, human fertility has collapsed completely, Britain alone stands tall etc. Yet at one stage I found myself desperately scanning a wall full of newspaper cuttings looking for a deeper, more joined-up explanation.

Cuarón has certainly tried to bake in some extra relevance into P.D. James's 1992 story, giving us a whole load of Allahu Akbar AK-wavers and destitute illegal immigrant "fujees". But the background to this mess (and even to the key characters Theo and Kee) never properly materialises.

Still, while it may not be the kind of movie that leaves you thinking, it is the sort to invade your dreams, unlike Aeon Flux, which does neither. And if it starts to wobble the moment you start to consider the detail, at the more soupy, holistic level it does actually seem rather plausible.

I have been a big fan of Cuarón's for some time. He can compose a scene with many more textures and dimensions than audiences are generally used to. Here, the scene when Theo, Kee and Miriam escape from the safe house is masterful. Mexican cinematographer Emmanuel Lubezki also deserves a special mention, in particular for the visceral final battle in Bexhill.

Meanwhile London in 2027 seems to have succumbed to the same deadly tuctuc virus that has ravaged Guatemala for the past 3 years.
Posted by Inner Diablog at 1:56 pm