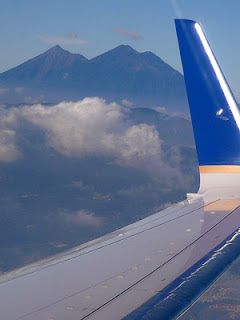 My final evening in Antigua is always such a melancholy experience - I hate it when the light starts to seep away and I have to come to terms with the fact that I have yet again used up my precious supply of luminous, birdy-trilled mornings.

On Friday the twilight found us in the market stepping between the candles the last few sellers use to illuminate their produce. On previous final-night occasions we have made for Lloyds' (now Cuzcatlan) corner in the parque − our corner − as the old bank's steps are ideally placed to absorb and retain the warmth of the sun from early in the morning until the time it drops behind Fuego.

I have reorganised the sets of images I took in Central America this Christmas to make them a bit easier to review.

New Year's Eve in Antigua was particularly spectacular this year. The main event was the seventh annual Festival of the Calle del Arco and such is its regional fame these days that many hundreds of visitors came from neighbouring countries and beyond. There was hardly any room to throw fajas de cohetes. ("¿En donde estan nuestros amigos de Mexico?" a an organiser asked into her microphone. "En Pollo Campero!" a member of the crowd shouted back.)

The festival began the year after the Millennium celebrations. They had been pretty good, but the main engines of fun had been the myriad of semi-private parties dotted around the city. At the end of 2000 the committee of the Calle del Arco formed and Antigua has seen in the New Year in an increasingly loud, colourful and public manner ever since.

In London you get about ten minutes of premium explosions shortly after midnight courtesy of the mayor, then everyone troops home in the cold and damp. In Antigua the fireworks are still lighting up the sky several hours after midnight. On Monday morning at 2am the parque central was as packed as it gets on a Saturday afternoon. I've been to Rome and Seville on the 31st of December during those seven years − riotously fun nights both − yet still a notch or two short of Guatemalan exuberance.

Time for me to hit the sack now. I didn't get any sleep on the plane last night and have been doing all I can to last through to a reasonably nocturnal hour tonight. I've started to notice the strange lacunas in the flow of my consciousness over the past hour or so...
Posted by Inner Diablog at 9:48 pm

Hola, Watch out for those lagunas.... I may have a few myself by wedensday evening. See you in London friend. Very hot here in Brazil ...