Executives and the Executive 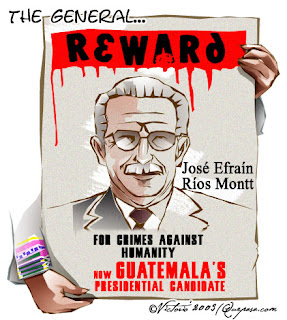 Following Efraín Ríos Montt's announcement last Wednesday that he plans to run for Congress this year in Guatemala, Amnesty International once again called for him to either face trial in Guatemala (for genocide, torture, terrorism and illegal detention) or be extradited to Spain, a country which specialises in prosecuting other countries' right-wing human rights violators rather than its own.

Meanwhile Guatemalan cops are reportedly chasing seventeen former executives of the failed Bancafe, as well as those of the more recently collapsed Banco de Comercio. Late last Thursday night, arrest warrants were issued for Bancafe founder Manuel Eduardo Gonzalez and for his son Eduardo Gonzalez, until recently President Oscar Berger's executive secretary. Charges of fraud and money-laundering are likely to be issued.
Posted by Inner Diablog at 10:17 am