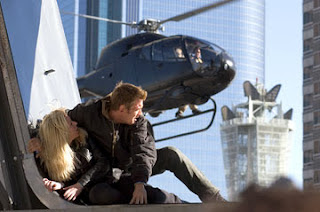 This is the second film in a week to make me think of Logan's Run...and Capricorn One and... and...

It's an entertaining if formulaic grand-conspiracy black chopper chase caper.

Djimon Hounsou clearly didn't make a great impression as a ruthless French mercenary as he is back doing noble Africans again in Blood Diamond; though towards the end, having already laid waste to LA, Monsieur Laurent does seem to be experiencing weird transplanted memories of these anterior, more honourable roles.

Sean Bean isn't at his best. He was more sinister as the by-the-book pilot in Flightplan than as would-be-God Dr Merrick here. Nor is Steve Buscemi's comic turn especially successful.

On the plus side I hadn't quite got the point of Scarlett Johansson before seeing this film. (Though at one stage she pauses to watch her 'sponsor' in a Calvin Klein ad. Blatant. )

One of the problems here is that the director seems to assume everyone already knows where the plot is headed, and so doesn't waste much time setting up (or exploding) the mystery of Lincoln 6 Echo's anodine existence. Alas black choppers alone do not a Philip K. Dick paranoid nightmare make.

Overall, there's a bit too much mayhem and general running around, and the fugitive agnates have far too many fortuitous getaways. Plus the plot ultimately hinges on the ease with which firearms can be smuggled into secret underground facilities.

Along with all the other movies it is a messed-up clone of, perhaps it needed to borrow a few chromosomes from quieter, more poignant sci-fi stories, like AI: Artificial Intelligence.
Posted by Inner Diablog at 2:27 pm