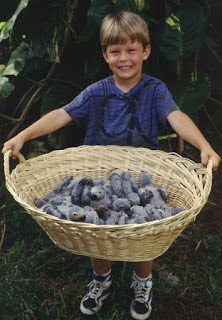 I rose early this morning in order to watch the impressively one-sided final between Serena Williams and an intimidated-looking Maria Sharapova.

So I used the opportunity to get myself up to Leyton and the New Spitalfields Market where you can buy fruit and vegetables by the box at quite remarkable prices, and be skewered by one of the many fork-lift trucks that career around the place like dodgems.

Talking of which, the roads in East London are dominated at that time on Saturday by drivers whose vehicles really ought to carry the warning sticker My other car is a white van. As I made my way north-eastwards one of these weekend family saloon maniacs started ferociously effing and blinding at me for daring to assert my right of way on a roundabout.

Whilst I'm on my own, purchasing massive boxes of perishable produce isn't all that sensible, but I did get myself a box of 8 Peruvian papayas and a box of 12 large avocadoes for a fiver each. They even threw in a few loose plantains, but these will take time to darken enough for frying (or microwaving). Meanwhile, the papayas are an essential part of my morning smoothie and general weight-control programme, and usually cost a pound each at Tesco. As for the avos, I am a fully assimilated panza verde.

I stopped at Magri's Pet Store on Hamlets Way near Mile End because the three-year-old African Grey that belongs to the owner was doing some gymnastics in his cage by the window. I asked how much a bird like that would cost and was told "eight and a half", by which I suppose he meant eight and a half thousand, but I have seen prices of $2000 or less quoted online. It's chastening to think that if I were to buy one now it would almost certainly outlive me. As the pet shop owner wryly observed: "You take them with you."
Posted by Inner Diablog at 10:57 am